Travelling from the UK with my friend and fellow fan Miranda (@loeffie6) joining me from the Netherlands, we flew into Vancouver (YVR) with the aim of seeing as much Arrow and The Flash-related stuff as two Europeans could possibly fit into 2 weeks. I think we succeeded 🙂

Bringing the European fans location tour poster along we hoped that fans who wished they were with us could be vicariously through the power of social media. So if you haven’t seen it already check out #YVRtour on my Twitter account @tanavip ! 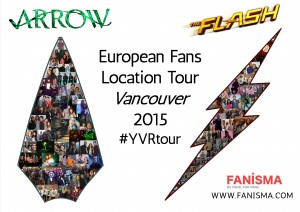 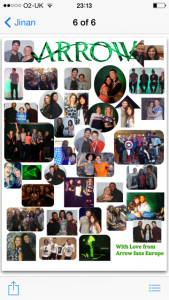 Part 1 – meeting the cast of Arrow!

We rocked up to Vancouver Film Studios in Burnaby with the simple intention of presenting the cast with some tokens of appreciation from their European fans – including Miranda’s stroopwaffles! And as the sun came out, so did Stephen Amell, David Ramsey then Emily Bett Rickards!

Stephen walked up and shook hands – ever the gentleman. Though we had met before, it was curious to meet him this time dressed as Oliver Queen – and in make-up! Knowing his love of fan art we explained the collage of European fans before gifting him; he simply said it was awesome. 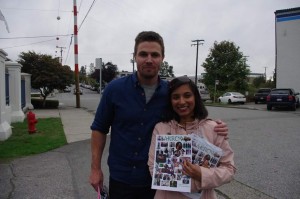 He reported filming was going well but busy. That week they were shooting episodes 404 then 406. Mentioning Dragon Con the previous weekend he said he’d had fun but it was a heavy schedule.

Having spotted Charlotte Ross A.K.A. Donna Smoak in the background we asked if they were filming together – he told us she was due to start filming the next day, and was looking forward to his scenes with her. From what I could gather 406 is going to be a real treat for those waiting for Oliver/Felicity/Donna interactions.

I took the opportunity to answer a burning question regarding his first meeting with Donna Smoak in episode 305 – he looked so happy in that scene I wondered whether that was scripted or if something had happened off camera. He implied the latter, saying ‘I was just having a really good time (filming that scene)!’

Then David Ramsey came over and started chatting as Stephen proceeded to sign Miranda’s plethora of Sinceriously and Nocking Point T-shirts. 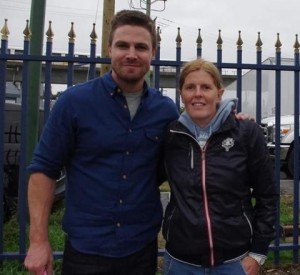 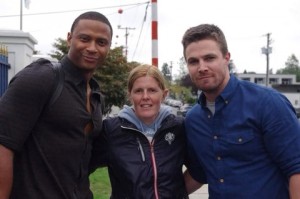 David is amazing – not only for the warmth and hospitality he shows his fans but also for battling through his back pain to shoot a show where his job would definitely be considered manual! Meeting him on his first day back to work after time off sick he was clearly struggling but still had a smile on his face and was interested to know how our trip was going. He told us how he loves Whistler (our next stop). Miranda jokingly asked if he’d injured himself playing soccer – he said no but he did used to play football. 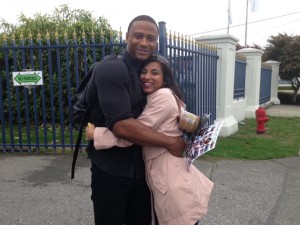 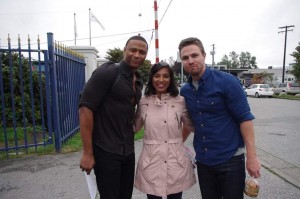 It was great seeing him again. ICYMI check out my interview with David on Diggle in S4