With information now emerging online about ARROW episode 406 entitled ‘Lost Souls’, from the upside down Olicity kiss that engulfed Twitter: 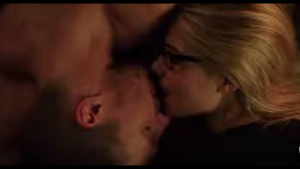 to the full synopsis: 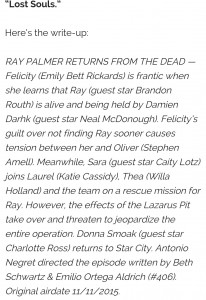 I thought it time to share what I can about being on set briefly during this episode:

We were greeted by a PA Hayley and led inside the studios. Movement in and out is only allowed between takes, denoted by a light outside and  loud bell! We were ushered inside to sit behind the director, Antonio Negret, and the script supervisor Susie. The director’s space was small and dark – like a cubicle filled with a wall of monitors – which are actually portable to enable easy transfer between sets. Antonio was very welcoming and explained the scene to us. I can’t give anything away except to say it was a flashback scene with Stephen Amell, on a new set. It was a relief to see him without the dreaded flashback wig, making him look better – and older. Hearing him acting just beside us, whilst watching him on monitors surrounded by props etc on a dressed set – including fire! – making the scene come alive was surreal, exciting and magical. I can’t wait to see the finished episode!

Despite the small space the set was bustling with activity until the AD yelled ‘Action’ in a loud British accent. It gave me a real insight into how much personnel and work goes into each scene. Hayley explained how her job involved delivering scripts to making contracts- and whatever the director wanted her to do. A dream job for a fellow nerd! It takes on average one hour to shoot a page of script – but it varies e.g. stunt scenes take longer. Most main roles e.g directors, ADs, DPs require at least 2 people to share the role per season as each episode takes a week to prepare before shooting for 8-9 days. We met Tim from the sound department who controlled the boom and the actors’ hidden mics. He gave us a job to do  – tell him if we spotted the mics on screen!

Listening to all the technical jargon being bandied about certainly sounded like a different language.

Construction of sets generally takes place on set – there is a specific department for this. Once the script is written, concept art is drawn and the finished design decided upon before construction is started – often only a few weeks before shooting starts. Apparently there is a great new set being made for 408/409 which has Hayley excited. I was shocked to find out that much of the Queen Mansion interior was actually copied from Hatley Castle and built as a set in the studios for season 1!

We were given a goodie bag with Arrow merchandise as a parting gift, which topped off a brilliant morning. 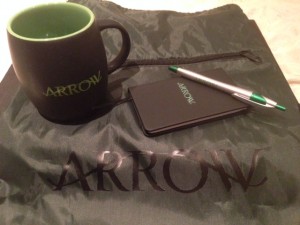 Thanks to all the crew who gave us their time and insight.

Check out part 3 coming soon where we tour the sets of Arrow – past and present – with DC TV’s super Director Glen Winter!!