I caught up with ‘The Flash’ star Candice Patton in London this weekend, to find out what’s in store for her character ‘Iris West’ in Season 2: 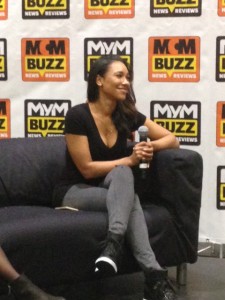 We started by giving her a present from the European fans, reminiscing about meeting in Birmingham earlier this year and discussing my recent visit to ‘The Flash’ set. I mistakenly referenced episode 207 as 407 (confusing it with Arrow) to which Candice replied “407? Did you time travel into the future in some way I don’t now about? That could happen!” After the laughing subsided, I got into the questions:

How is your character going to react to Barry’s new love interest?

CP: She’s happy for Barry. I mean she just lost her boyfriend so she’s going through that.

Is she over Eddie now?

CP: I mean it’s been 6 months, she’s not over him but she knows he’s not coming back.

CP: It’s possible, with the multiverse…

And Rick Cosnett was saying that he might come back, perhaps as a different character like Cobalt Blue

CP: I know a lot of people have been speculating about that. I mean anything could happen, but as of right now I know that he’s not coming back. I miss him; Eddie’s my favourite, I want him back. 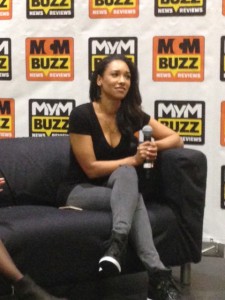 I do as well! So whereabouts are you in filming right now?

Are you in the crossover at all?

Aww no, because I thought that now you know (Barry’s secret) you would be in the crossover…

CP: I literally had like one line in the entire episode.

So you got time off instead?

CP: A lot of time off, yeah, so I flew back to LA which was great.

I loved your scene with Oliver in the last crossover, where you say he’s on my list of 3, and I was wondering if you would get another scene with him?

CP: Yeah I mean I’m sure we’ll do more at some point you know, and we love the crossovers and the other networks.

So maybe with ‘Supergirl’… 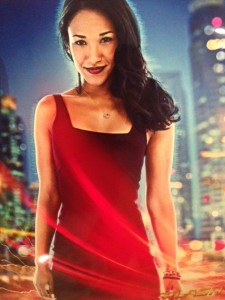