Travelling from the UK with fellow fan Miranda joining me from the Netherlands, we flew into Vancouver (YVR) this September with the aim of seeing as much Arrow and The Flash-related stuff as two Europeans could possibly fit into 2 weeks. I think we succeeded; meeting some of Team Flash’s cast and crew, touring the studio sets, and watching a scene from episode 207 being filmed –it really was the VIP fan experience and I’ve been dying to share it with you!

[Note: This article is not spoilery – rather it’s filled with behind the scenes info I hope you’ll enjoy as much as I did. But there is S2-related content – hence the delay posting- so if you’re not up to date with The Flash, be warned!]

Bringing the European fans location tour poster along we hoped that fans who wished they were with us could be vicariously through the power of social media. So if you haven’t seen it already check out #YVRtour on my Twitter account @tanavip and Miranda’s @loeffie6!

Meeting Grant Gustin a.k.a. The Flash

We met Grant with his girlfriend, dancer Hannah Douglass, on a beautiful sunny morning in Gastown. Grant had a rare long weekend off due to a Canadian bank holiday, so had taken the opportunity for a mid-morning coffee run. “ I like coffee, but I drink tea too!” he mused as I stated my preference for the latter. They were filming episode 205 at the time, and Grant seemed really pleased with how the season was going so far. “There are lots of guest stars already” who he’d had fun working with, though couldn’t specify at the time. He explained season 1 as the Flash took some getting used to, as being a lead on a show was new to him, but he felt more settled in the role going into season 2, and was enjoying the tone this season. “It’s lighter this year”. He shared my surprise at this given how season 1 ended. We asked about some of the locations The Flash has shot at in Vancouver. Grant explained it was hard to remember particular sites, given they often do ‘plate shots’ and CGI them in afterwards, so it can be difficult for him to imagine the scenes. Accepting our fan collage, he expressed his gratitude to his European fans, sharing that he was hoping to attend next year’s convention in Birmingham, UK – since his cast mates had had such fun there! Grant was warm and welcoming yet with a real star presence and I can see him being the defining embodiment of the Flash for this generation of fans. 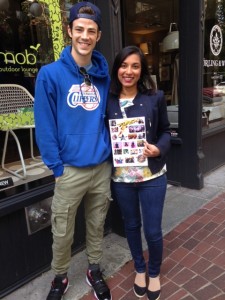 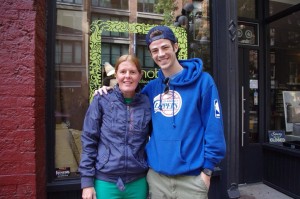 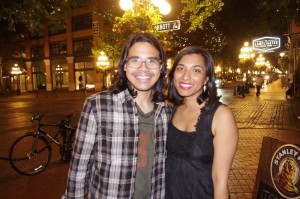 Carlos is everyone’s favourite funny man on The Flash, and in real life he seems just as lovely and sweet as his alter-ego. He made a surprise appearance for fans at a convention in Paris earlier this year, and was touched by fans’ pictures from this. He talked about travelling around Europe during hiatus including briefly visiting Holland and bumping into Willa Holland there unexpectedly. There is definitely some irony in there! He couldn’t really talk about his character going into season 2 except to say he was happy with how things were going, expect more funny one-liners, and also there are no plans currently for his character to cross over to Legends of Tomorrow. Here’s what he had to say to fans…

After showing us the Arrow sets, producer/ director Glen Winter took us across to see where The Flash was filmed, giving us some insight into the show along the way.

Glen was the Director of Photography on The Flash‘s hugely popular pilot episode which aired to record breaking audiences despite being leaked earlier in the year.  The CW’s trailer which previewed the series premiere has amassed over 30 million views on YouTube, and Glen is rightly proud of the episode. He also directed episode 104 “Going Rogue” and the Flash/Arrow crossover episode 108. He is happy to be returning to direct another episode in January, though he doesn’t know which one yet.

Despite the light being off and some of the empty sets being covered with drapes, we were filled with excitement and viewing the sets really brought them to life.

Check out our slide show of on-set pics, taken during the tour!

Standing in the particle accelerator was entrance was simply – cool. Curiously the cafe Jitters which appears warm and cosy on screen had a slightly eerie feel without its usual lighting. It was interesting to see the ‘translight’ backdrop outside the windows used to create a realistic daytime sunshine for the internal set. It was also odd to come across a taxi parked inside the building among equipment!

Glen explained that the ‘plate shots’ mentioned by Grant earlier are essentially where they film a background and then add a ‘digi-double’ e.g. The Flash jumping across lorries. These are easier shots to film as CGI is added in post-production. “Previously such CGI e.g. when filming Smallville was very expensive, but now things have evolved everyone is using CGI!” This explains how Barry runs on that treadmill – a digi-double is used – the treadmill isn’t moving at all for this.

He also said that due to the nature of the shows, they need to be “amorphous” and adapt to what is needed, sometimes making new things specifically for the show.

One of Glen’s favourite gadgets on The Flash is the fake anti-cold gun Cisco makes out of a vacuum cleaner – but he pretty much likes anything Cisco makes!

So what’s his favourite metahuman? Roy Bivolo a.k.a. Rainbow Raider, who we meet in “Flash vs Arrow”. We took the opportunity to ask who Glen thought who would win in a fight between our two heroes, but he couldn’t really say.

Glen’s favourite set is Central City PD – and I’d have to agree. With the beautiful wooden mural, swish floors and tall ceilings – especially for a set – it feels spacious and elegant. The exterior shots of CCPD were initially of Vancouver City Hall. It’s amazing to see the attention to detail on this set, with old PD photos lining the upstairs walls and inside jokes such as ‘Wanted’ posters with pictures of the crew! Joe’s desk had a homely feel to it and it was easy to imagine police really using the offices. Patty Spivot has her own desk now too (since Eddie’s gone 🙁 ). And Captain Singh’s chair is really comfortable!

As for new sets –  expect to see a little something different of the West house this season.

What’s your favourite Flash set? We love to hear your comments so leave them below, or tweet me @tanavip

Watch out for Part 2 coming soon where we go on set for episode 207, chat to producers and crew, and get some pictures with the lights on!