Arriving at the huge white buildings housing Arrow‘s sets with Glen Winter, I barely had time to ponder what and who we might expect to see when we bumped into James ‘Bam-bam’ Bamford. James is legendary to fans as Arrow‘s stunt team co-ordinator, choreographing Arrow‘s martial arts and action sequences since the pilot, but he was on set that day to prep for his upcoming directorial debut in episode 407 “Brotherhood”. Asking if he was nervous about the shoot, James said he felt quietly confident and prepared. James has directed scenes of Arrow before as the 2nd Unit director, but these are usually stunt scenes. “Now I get to direct them with actual dialogue!” James laughed. I admitted the action scenes are my favourite part of Arrow. “Me too!” he replied unsurprisingly “so don’t worry there will be plenty of action in episode 407”. He reminisced a little about visiting Holland before leaving us to prep more. I can’t wait to see how he directs the more personal scenes, I expect fans will love Bam-bam’s directorial style. 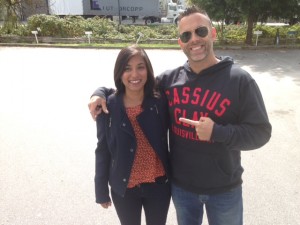 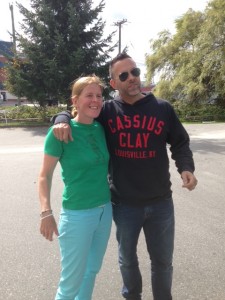 Before entering the main sets Glen uncovered part of the Japanese sub set used in season 2 . Though we couldn’t manage to see inside he explained how filming the huge fight scene on board the freighter Amazo where Oliver takes on Slade in episode 2×15 was one of his favourites. They had to build a special water set to film this costing around $100K. Glen likes to shoot scenes in single shots known as ‘oners’. “In that scene I said I want to do a single shot that opens up this battle – so the camera tracked along the deck, and gunshots and explosions were going off, and we tracked like a helicopter through the whole thing and ended up on Stephen [Amell]. So the [stunt team] choreographed that whole thing for me, and then we figured it out with the camera, and it was great.” It’s certainly epic and one of the most memorable fights from season 2.

Check out our first slide show of behind-the-scenes photos below!

Then we headed into the Lazarus pit set! It was nice to see the set had remained, complete with candles, as often sets are re-dressed to make new sets due to expense. There is no roof to aid lighting, and all sets look bigger on screen but the ‘hot tub’ is pretty sizeable.

Turning a corner we were suddenly in the new Arrow lair (or cave if you prefer), first featured in episode 404. Though it looks vast as the team enter it on screen, with the lights down it felt less cavernous, but there was plenty to see! Walking up to the main platform, we eyed Felicity’s workstation complete with swivel chair. One of things missing were the suits though their cases were there. It felt magical being able to explore the set before the show had aired getting a sneak peek into what we could expect. We couldn’t take too many photos, but one thing we did get to examine was the arrows. There are real and rubber arrows made –  Stephen really does use nocked arrows in close-ups, but due to safety the rest are mainly CGI.

Looking around the workstations the attention to detail is great, with little fuses and circuitboards, despite being able to see little of them on-screen. After seeing the lair on TV, it struck me how much extra lighting and tech must be added in post-production e.g. the salmon ladder had no flat screens behind it. Speaking of the infamous piece of equipment, as intimidating as it is to look at, I gave it a try at Glen’s urging – and couldn’t even reach the bar! I now have greater respect for Stephen Amell’s ability to do this repeatedly. The ladder has also been made portable this season. So how do they get the bar down after? I suggested that they shoot it down with an arrow – Glen couldn’t confirm or deny this so I guess we’ll just have to wait and see, as supposedly it will be revealed this season. We also spied the dojo and the Ducati, but I’m clueless as to how they get a car in there!