David Ramsey, aka John ‘Dig’ Diggle on Arrow, demonstrated why he continues to remain a fan-favourite when he flew in from Puerto Rico to meet fans in Paris last week. Discussing S6 (season 6) predictions, Prometheus, O.T.A. and Dyla, he was eager to hear fans’ views, as well as divulge some popular theory-crafting of his own (he’d love to see Thea as a villain- hell yes!). Turns out, he may be the biggest fanboy of them all!

He starts off by apologising for not being at Heroes and Villains Fanfest London, due to previous commitments, as fans were hoping for an O.T.A. panel and he is eager to make that happen. He continues by complimenting Josh Segarra, a new fan-favourite as Prometheus.

“Did you see Josh at our wrap party? He sung karaoke and he was awesome! Josh is great. Josh is one of those bad guys that I just wish could stay on the show, or stay in the [Arrowverse] universe like John Barrowman. But he had to go!” But is Prometheus really gone? “Well that’s the great thing about our universe, I mean look at Black Siren right?”

On Black Siren’s return Ramsey adds: “She is clearly a villain, but there may be a redemptive arc – or at least you’ve got to play with it; I don’t know if she’ll be redeemed or not. For Oliver it’s another opportunity to save Laurel.” 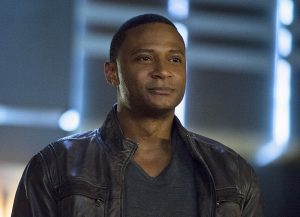 We know for sure at least Oliver and his son William survived the explosive ending to S6. So will Dig be giving him some parenting advice?

You know Stephen [Amell] said to me earlier in S5 ‘I think if the Oliver and Felicity thing evolves, I think we are going to become more like you and Lyla, where it’s just a relationship’. My reaction (mirrored by the fans) was Thank God! Either be together or don’t! She is either a risk to the team, or she’s not a risk to the team, but to me it was like please let her have a life that doesn’t revolve around this dude! Like Lyla – Lyla is super strong, and the leader of ARGUS – whether she’s married to John Diggle or not, it doesn’t even matter.”

Fans want to see more of Lyla, played by Audrey Marie Anderson, and Ramsey agrees. “I think you will. I think that relationship is something we’ll talk about – I mean you have to right? She is the new Amanda Waller, she’s married to a vigilante, she has her finger on the pulse of the Suicide Squad, it’s ripe for a story! We touched on that a little bit in S5, there was a little bit of a [Dyla] rift, which was nice. And also their son grows up to become Connor Hawke. There was a storyline in The Flash that whatever choice Connor made, or didn’t make, cost him his father’s life -me. That’s just waiting to be told, or touched upon because he grows up to be a such a pivotal character. That dynamic between Dig and his wife and this son that grows up to become a vigilante and take on the mantel of Arrow. The Diggles is a story that you can have a 6 episode arc on. Audrey is excellent so I hope we see more of her this season.”

On Olicity: “I can’t speak for the producers but it’s mine and Stephen’s hope that where the Oliver/Felicity relationship goes is that they’re together, they’re vigilantes and there’s no risk to the team. And you need that – I think that’s what make Lyla so powerful, she was powerful before she met Diggle, and I think for me as a fan watching the show we see that in Felicity, but it always goes back to this are we together/ not together. I  think that the audiences are very sophisticated and as an actor I was told your talent is where your choices are, so if you make a choice to follow this routine of creating constant drama in a relationship it just cheapens the overall evolution of the character. They’re together, or they’re not, that’s fine, move on with your lives. 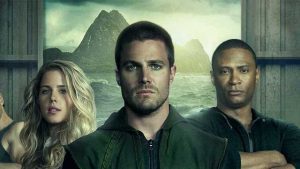 So who does David Ramsey want as S6’s big bad?

“I would like Thea. Merlyn’s gone -or not, who knows- but you have to talk about her reaction to that, this love/ hate relationship she had with her father over the years and what that did to her.Also they haven’t explored the effects of the Lazarus pit completely I think, so between those two I think maybe she’s ripe, I think that storyline of her having some animosity towards Oliver is there. Maybe not for the whole season but I wouldn’t mind seeing some culpability come from Thea. But now there’s even more stories to tell with the new characters.”

When fans point out there seems to be a double standard between Oliver, who is constantly being made out to be a sinner despite trying to rectify his mistakes, and Barry Allen, who repeatedly makes the same mistakes but seemingly without condemnation, Ramsey suggests that as a potential crossover theme.

“The very first crossover was Arrow vs Flash, but it was an experienced Arrow and obviously The Flash had just gotten his powers. It would be interesting now that there’s a more jaded Barry and a more evolved Oliver, to not necessarily have them up against each other but to approach that Barry hasn’t learned from his mistakes and maybe it’s time for him to learn. Because we’re always pitching stuff to the writers. Like the elevator shaft scene [in episode 5×20] was my pitch to Kreisberg. I said ‘we need a scene where we have O.T.A. and they’re about to fall and you’ve got Diggle there and they’re all holding each other. Stephen suggested a lot of things for S5 too. I like that idea of Oliver approaching Barry, and this list of things Barry did wrong that he could have done right.”

With regards to Barry gender-switching Diggle’s son, Ramsey says “I don’t think Diggle can miss something he’s never had. I have a son and if there was a time-jump right now and someone told me that DJ used to be a girl called Sarah or Linda or whatever I’d say OK. I don’t know Sarah or Linda, I only know DJ. So I think Diggle’s reaction should have been more toward ‘Barry how could you have done this, how could you have used your power in such a way and been so negligent?’. Barry has the potential to be the most powerful superhero in our universe because he can change time change space etc so I think for Diggle I think he recognises Barry’s been reckless.” 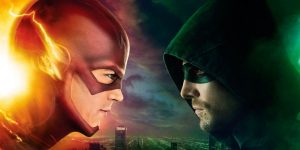 Ramsey thinks Barry’s repeated time-travelling will affect the entire Arrowverse. “In my opinion the movies are following a comic storyline called Injustice, where Superman goes rogue. He becomes a dictator on planet Earth. Basically the Joker tricks him into killing Lois Lane whom he finds out later was pregnant at the time, and Superman kills the Joker and creates a dictatorship on the planet. Part of the Justice League joins Superman; part of the Justice League fights against Superman and joins Bruce Wayne/ Batman. Our shows on TV are following the storyline of Flashpoint where Flash makes the choice of saving his mother which creates these rifts which affects different characters in our universe. The theme for S5 is family but I don’t know what that means; I don’t think they know exactly what that means yet. Obviously that fits into Thea having a reaction, Lyla having a reaction, like what these rifts mean. Stephen and I talked earlier again about something he wanted to see – something that really breaks up the bromance [between Oliver and Diggle] and I said ‘ After kidnapping my wife it has to be something even bigger which crosses the universe’. But we’re always throwing ideas out. In the Injustice series Batman is the one who made the contingency against Superman and against the whole Justice League. He has all these contingencies that can defeat all the Justice League if and when they ever go rogue. And no one really has that mind except for Bruce Wayne and Oliver Queen. So it would be interesting to me if Oliver comes to the place where [he thinks] Barry is dangerous and we have to do something about him, as much as I love Barry. And that creates the rift, because Felicity has a position on this, and Diggle has a position on this, and it creates a rift in the team, but he’s of the position that Barry has to be stopped and put under control. A DC Civil war!

Arrow is expected to return for season 6 in October this year.