With Syfy channel’s shift in recent years back towards more extraterrestrial programming, the network has produced a whole box of space opera delights for fans to revel in. Dark Matter is one of the shows leading the pack, and with its gritty brand of Firefly-esque action, drama and character interaction, it’s been a hit with audiences and critics alike.

Created originally as a comic book series by Stargate writer/producer Joseph Mallozzi, and Paul Mullie, the show was adapted for Syfy (aka, Space Channel in Canada) and premiered in 2015. It follows the lives of six people on a literal voyage of discovery after they wake up on board the spaceship Raza with no memories at all. Production recently began on its third series, so I went along to set with MyM BUZZ co-host Yael Tygiel to see where the show is going next and discover what it takes to make outer space on Earth. 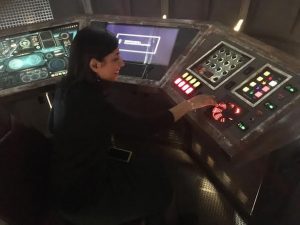 When we first arrive in the foyer of the Dark Matter production offices in an industrial estate outside Toronto, we wonder if we’re in the wrong place, because we’re greeted by pictures of the Lost Girl cast. It turns out the Dark Matter team inherited its offices from that show, and still use some props and items from Lost Girl.

We’re met by Alison Hepburn, one of Dark Matter’s new writers & script coordinator; Hilda Babazadeh who heads up the show’s social media; and unit publicist Renee Pye. Moving through the production offices it was fun to see the staff had taken the spaceship theme and run with it – with black/yellow striped tape around the futuristic coffee machine which also bears the sign “Do Not Press The Red Button”.

Apparently if you press it, you break it, and if no one gets coffee, everyone gets cranky – it’s disastrous! The coffee room gives us a bird’s-eye view of the surrounding area, and allows some Dark Matter-related sightseeing.

We wind our way through the maze-like offices to the entrance of a huge warehouse which houses the main sets. The first department we come across is Set Decoration, which the team explains provides the dressing around the room, like stuff on tables; props are things the actors interact with like guns or comms. 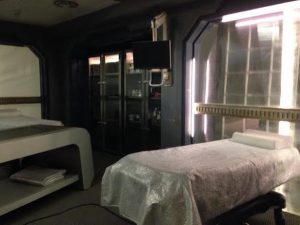 We then enter the first set – the infirmary. When we peer into the medicine cabinet the attention to detail is immediately clear. It’s filled with fake pills which gives the set its authenticity.

While we’re admiring the set, showrunner Joseph Mallozzi pops in to explain the morning’s proceedings [Spoiler Alert]. “We’ve got two units going. This is a great scene – we’re doing a shoot-’em-up with Torri Higginson who plays Truffault. She’s got two guns and she’s taking out members of Ferrous Corp’s strike team.”

Mallozzi is wearing a very sharp suit and apparently it’s his trademark. Joe is clearly a multi-tasking giant – on top of finding time to dress in designer chic each day, pen scripts, produce the show and write a blog he also managed to adopt a dog over the weekend! 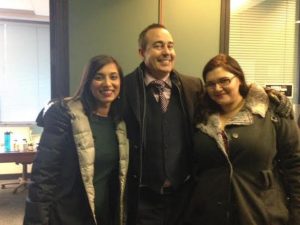 Though the clinical setting has sturdy-looking surroundings, most of the walls are removable to allow shooting from different angles. The back wall of the isolation booth is quickly being re-attached as we sit down with Jodelle Ferland, aka Five, for an interview.

We’re surprised to discover that the Dojo where Four trains and the mess are, in fact, the same set. The team explains how set decorators take out all the mess stuff, put in the swords and change what’s on the triptychs and it looks like a whole other room; they have the changeover down to an exact science. The other studio has a bunch of swing sets [temporary sets] like the prison and the alley way which they set up, shoot and then take down, which is pretty cool to walk in to and think, “Two new sets!” 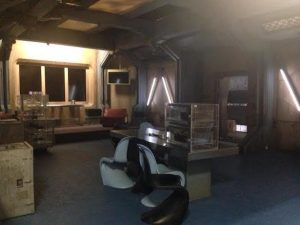 The triptychs are the moving screens on the mess wall. It changes from episode to episode. Expect more novel triptych images in season three. 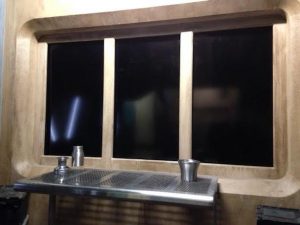 It’s amazing how the art department have turned wood into what looks like sturdy, aged metal. It’s also fun to find out the automated coffee maker in the mess works by the magic of… someone pouring coffee down a tube!

We also come across a weird art piece for season three involving a life-sized man – no spoilers, but it will remind you of a famous Star Wars moment.

Next stop, Wardrobe Dept where we meet costume designer Noreen Landry. We get a chance to check out some of our favourite styles from season two, including the kimonos worn in the Court of Zyron (left). We also find one of Yael’s favourite pieces – Melissa’s black jacket that she wears when she’s Portia Lin (right). 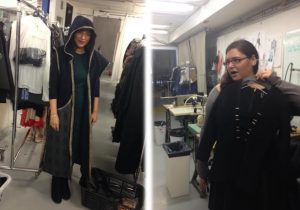 Those costumes in particular are a lot of work for the team. But it’s not just the actors Landry styles. She reveals that one of the department’s quirks is putting up dog pictures on their wall. “We put up a dog for every episode. They’re just dogs that Anna, our assistant costume designer, finds on the Internet, but we all did Lost Girl together so we started it with cats on Lost Girl.” 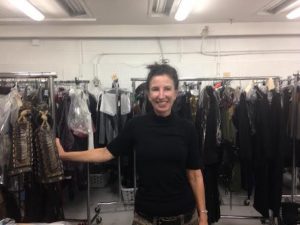 It’s just coincidence that Joe Mallozzi likes to dress up his dogs in outfits too…! 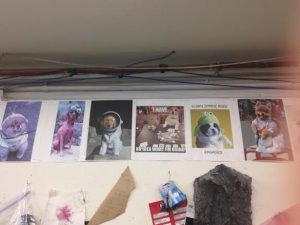 “Lost Girl was a little more fun for us because it was girly; you had feathers and bling. Maybe we’ll get that for Dark Matter season six?” laughs Landry. The team also jokes about doing a musical episode because there is some serious singing talent in the cast (Melissa O’ Neil won Canadian Idol).

We also get a preview of some of Four’s new clothes for season three – expect lots more robes! – and another new look for the Android, as well as the GA outfit this season. 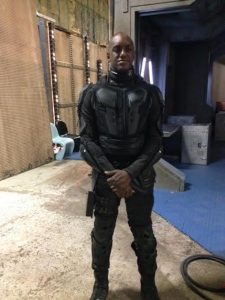 Landry’s job is a lot more than just choosing clothes and making them fit. She actually designs a lot of the outfits and showed us some of her concept drawings. “This is the first thing that Joe gets to see of what is going to be featured.” Trying on the clothes it’s easy to see how they help actors change persona. 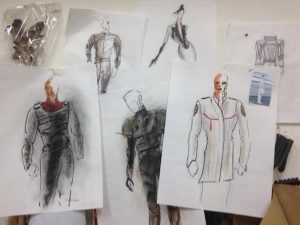 Take a tour of the wardrobe department yourself in this video:

Despite the demands of the job there is a fun atmosphere in the department, especially when co-executive producer Robbie David drops by to give us some tourist tips. Landry lets us peer into the continuity room where clothes are closely guarded to make sure nothing is out of order on screen, whether they be on extras or the main cast.

FOR MORE FROM BEHIND THE SCENES OF DARK MATTER, INCLUDING INTERVIEWS WITH CAST AND PRODUCERS, CLICK ON PAGE 2 BELOW!