After taking a Sunday tour of The Flash‘s empty sets with Glen Winter in Part 1, we returned to Vancouver Film Studios in Burnaby, to check out the production offices and studios whilst production was in full swing during episode 207 ‘Gorilla Warfare’. Check out more on my Twitter @tanavip under #YVRtour.

[Note: This article is not spoilery – rather it’s filled with behind-the-scenes info I hope you’ll enjoy as much as I did. But there is S2-related content – so if you’re not up to date with The Flash, be warned!]

Walking into the production offices we immediately noticed the warm welcoming atmosphere with lots of colourful posters featuring The Flash characters and fan art adorning the walls. We were introduced to Ryan, producer’s assistant on The Flash. In a bid to one-up our Arrow goodie bags he started the tour by giving us signed posters of The Flash Season 2 – a sure way to win over fangirls!

After chatting about our comic con experiences meeting some of the actors on The Flash,  Ryan introduced us to producer JP Finn, who started on Arrow before moving to The Flash. He mentioned the exciting proliferation of DC shows on TV, including the animated CW seed series Vixen.  We checked out his office full of TV ornaments, including an awesome poster of DC TV villains and superheroes. 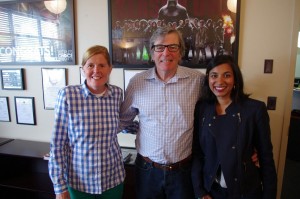 It was lovely to the sit in the offices and have lunch whilst meeting members of the production team who were keen to meet fans of the show. We chatted to a production manager who explained his role. “Basically anything to do with equipment and people and all the boring stuff really! I have to know a little bit about everything and with the producer try to keep this thing floating on an even keel, and [balance] the numbers. So many tech people, directors, visual effects guys and all that have their own skills, so all that artistic side happens and we have to make sure we can pull it off. Every show is different; this one is huge, compared to a show with no visual effects or just people talking. But it’s fun, and it’s worldwide!”

We talked about the global appeal and promotion the show has. “Arrow broke the ground when Warner Bros. brought them to Vancouver and it was a different kind of experience for most people, and now the superhero genre has really taken hold.” With regard to the spin-offs, Legends of Tomorrow differs from The Flash in that it seems LoT will be mainly shot on location whereas The Flash has specific sets, and lots of them.  The Flash has 5 main/standing sets which the production design team get tasked with creating – CCPD, STAR labs, Jitters, the West house, and Barry’s lab.

As we left the producers to work on a conference call and prep for the next episode, we were introduced to Amanda, another production assistant and our tour guide. Amanda also tweets on the official Twitter @FLASHProdOffice, and produces movies in her spare time! The production area houses construction, props, transportation and also the art department, where we started our tour. “Everything you see on-screen is there on purpose, right down to the logo on the Big Belly boxes.” The attention to detail is amazing, and the walls are covered with drawings and posters showcasing the artistic talent. They also have a product placement deal with AT&T.

It was lovely meeting other staff like Lukia who were touched by the global fan response to The Flash, and enjoyed hearing about conventions like City of Heroes, finding it has become more than just a TV show. Indeed the production team are so appreciative of the gifts they have received from around the world that they put every piece of fan art up on their office walls and keep a map of where fans have sent it from! 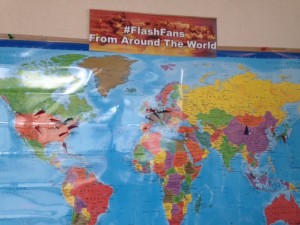 If you fancy adding to the walls you can send your fan art to:

A light on outside the set building indicates cameras are rolling. Once the light went off we entered the huge warehouse type building and made our way towards the ‘live set’ for that scene – Barry’s lab. We met the trainee assistant director or ‘Taddie’ for the shoot, amongst other ADs who were busy assisting both cast and crew. The dozens of crew members worked like a polite well-oiled machine, reacting quickly to the various commands and filming terminology being shouted across the set by director Dermott Downs and others.

We were ushered to a monitor station beside Barry’s lab to watch the filming of a scene between Barry and Patty. I didn’t know what to expect watching the scene, and without audio or the script I could only guess what was happening between the two, but even though the body language was flirty I was really surprised to see them suddenly kiss! 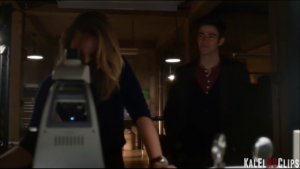 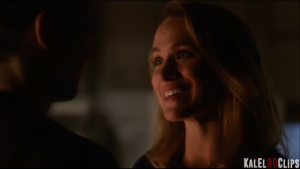 It was certainly a big spoiler, though I knew there were plans to introduce a new  romantic interest. It was so exciting to learn that story development, and being in the studio you could feel the chemistry between the two characters, making me eager to see their relationship arc. Although Westallen fans may have been disappointed with that storyline, I agree with Candice Patton’s take on this when I interviewed her later in the year.

A second unit was also filming simultaneously on a separate site, with Carlos Valdes, in order to finish scenes from episode 206. It seems the shooting schedule on Arrow is tighter than The Flash due to more fight scenes and less CGI. Perhaps this is one of the reasons the atmosphere on The Flash set felt more relaxed.

We then moved into the CCPD set, meeting Sara and Tina from the hair and make-up department. We discussed the extra work of merging three DC TV shows from a production perspective. “It makes our heads explode a little bit!” Tina said “but it’s exciting to see LoT from the ground up.” “They are all really different shows – different moods, different temperaments – but somehow the crossovers work.”

So how do you decide on the look for each character?

“Well it’s a collaboration with a lot of people. You look at their characters and decide on that, and then the actors have input as to what they want to look like. We do camera tests when we first start to decide on a look, and it always changes from there. We get directions like ‘we want  them to look very fresh or clean’ and then slowly it builds up and people get a little more glamorous, because you know, we want to see them looking beautiful! If there’s a specialty thing – someone gets burnt or cut for example – they have to decide what they want it to look like and then we just do it.”

With Barry for example when he gets hurt and then he heals faster than others do you have to think about that – how he changes each time you put on a scar or wound?

“Yes – you have to take very good photographs or be very cogniscent of what you’re doing. Sometimes he heals faster than others; sometimes he is recovering from something else and his metabolism is going, so it changes. So you write it all down and take photographs.”