With DC TV spin-off Legends of Tomorrow gearing up towards its series premiere and teasing little glimpses of what’s to come, it’s finally the right time for us to share some behind-the-scenes treats from our recent trip to Vancouver. Fellow Fanisma fangirl Miranda (@loeffie6)and I had the unique pleasure of first watching the initial pilot scenes being shot alongside fans, meeting cast and crew, before spending an entire day on set (part 2-coming soon)! And now we bring you set pics, stories and even interviews so you get to experience it too! Check out my Twitter @tanavip for extra video clips and tidbits. So, who’s excited for the show?!

On a warm sunny Wednesday morning back in September we strolled down to a waterfront car park overlooking Vancouver’s harbour, where the first day of production on Legends of Tomorrow was already well underway. The deceptively calm air did not allay our excitement as we watched Wentworth Miller and co. block their scenes ahead of the start of filming.

Wentworth (Captain Cold) Victor Garber (Prof Stein) and Arthur Darvill (Rip Hunter) were all present and looked great in person and in normal clothes, sharing smiles and waves with the small crowd of eager fans that had started to build. Director Glen Winter, EP Marc Guggenheim and showrunner Phil Klemmer were also on set  busy with the crew as they began the intense 15 episode shoot schedule.

Soon the stars left to get into costume but the bustling on set did not slow down. A separate stunt area was erected off to the side where a stunt couple, whom I now presume were doubling for Hawkman and Hawkgirl, practised their wire work.

We took the opportunity to meet crew and fans who had gathered from France, England, USA and Canada to watch the epic first moment of filming. 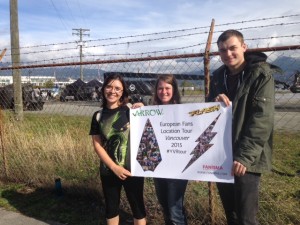 Chatting to one of the crew members Devon he informed us that most of the crew were local to Vancouver, and they had just finished working on Marvel movie Deadpool together before starting on Legends. “Making that movie was a laugh-a-minute” he told us. “Often you make comedies and the jokes fall flat during filming but Deadpool is a gem, people are going to love it!” It was also a good shoot as it’s full to the brim of action scenes. I for one cannot wait to see it in the cinema.