He made it. The actor who defined his career by the number of days he would work in a year became the star of his own TV show and embodies not just one but two super heroes: the Green Arrow and Casey Jones. Still, the hockey-wielding arrow-shooting Canadian is not quite a movie star… yet, because Stephen Amell certainly knows how to run the distance. 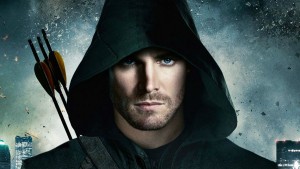 “I’m more of a runner”. These words uttered by Oliver Queen in the first season of Arrow could also define Stephen Amell. Sometimes a career is a fast race but more often than not it’s a marathon. It’s a good thing the blonde was recently rejoicing in his first grey hair, for it might take him a few more years to convince Hollywood to open its doors wide enough for his broad shoulders. Admittedly, it’s impossible to mention his work without referencing his impressive physicality. You’d have a hard time finding an article not mentioning his abs – and for good reason. The moment when Oliver Queen climbed the salmon ladder in the Arrow pilot made TV history. Amell doesn’t want you to forget it. From the spinning instructor in Queer As Folk to Dante’s Cove, Hung or Arrow, he has been flaunting his chiselled body on the small screen for years and knows the power it holds on male and female audiences alike. He would just like you to remember he can talk too.

Stephen proving his abs are real at SDCC 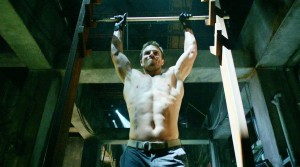 Stephen on the infamous Salmon Ladder

To be honest, Amell could have used his physique to his advantage a lot more if he was not camera shy. There’s a restlessness in him that makes him hate posing for professional photographers. He might be Abercrombie & Fitch handsome but you won’t find a model past in his resume. He would rather sell insurance in Toronto to support himself than walk the runway. As the legend goes, or as he likes to tell the story, the moment he was offered a raise and a permanent job in the insurance company, he packed a bag and drove to LA with his dog in his Smart car. He crashed at younger cousin’s place, Robbie Amell, who was already busy making a name for himself in California. That’s where he started a blog detailing how he hoped to work 100 days a year. Titled “Prelude To A Big Break” and still existing in page 5 of any decent Google search, it tells the honest story of an ambitious young actor striving to audition and gain parts, and also failing at meeting his goals.

Stephen Amell had yet to meet his stride before his permanent move to Tinseltown in 2009. After guest starring in the best Toronto could offer, he had literally hit the wall with his first big screen role. Being flown first class to Ireland to star in Closing The Ring, directed by Richard Attenborough and featuring Shirley MacLaine and Christopher Plummer must have felt like he made it. This World War II love story told by an Oscar winner where Amell would get to show a wide range of emotions and not just his pretty face was supposed to put him on the map. He recalls being praised everyday on set for his portrayal of a young soldier. But everything crashed to a halt when the movie was released in 2007. It didn’t just bomb or went straight to video, it was way worse than that: the studio dubbed his voice without his knowledge. So mortified was he, that he lied to his loved ones after the first screening claiming he had tried on a different accent for the film. It would take him years to admit to the truth publicly. The actor still doesn’t like to dwell on it. While promoting Teenage Mutant Ninja Turtles 2 this spring, he would not correct reporters who asked him what it felt like to see himself on the big screen “for the first time”. Because he’s not a liar, he would subtly point out it was his “first time in a blockbuster” or “in a movie this size”. But he would not elaborate. 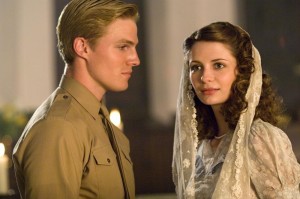 With Mischa Barton in ‘Closing the Ring’

This type of ‘crash and burn’ does not happen often but it places him in illustrious company, with the likes of Andie MacDowell, Arnold Schwarzenegger, Mel Gibson or Eva Mendes. Still, it was the lowest point of his career and it took him a while to find his pace again. Amell once joked he was dubbed over because his acting was so bad. One begs to differ; the real reason behind it might be that his physique clashes with what you expect his voice to sound like. His natural timbre is more on the falsetto side and is a few octaves shy of what you would expect in an action hero. It might explain the studio move more than his performance. Interestingly, the contrast between his looks and his soft-spoken voice would prove one day perfect to illustrate Oliver Queen duality. In the Arrow pilot, the playboy with teenager inflections clashes with the vigilante sounding like Christian Bale’s Batman. Amell can play both sides of the spectrum now. One could say he finally found his voice… 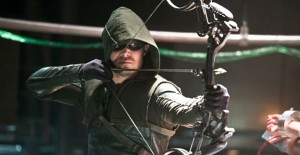 Amell’s move to LA finally allowed him to recover from that failure and to challenge himself away from the safety and familiarity of the Canadian scene. It soon paid off professionally with him guest starring in big network TV shows like CSI: Miami and NCIS: Los Angeles. But it seems to have cost him his marriage. Again that’s a part of his life Stephen Amell doesn’t discuss, probably because he doesn’t want to expose a woman who had never chosen to live in the limelight. So let’s just say he was married in Toronto before moving to California and she would not follow. His discretion regarding his private life proves one thing: for all his social media presence now (he can barely stay 2 weeks away from Facebook) and generosity with fans and interviewers, he can be very discrete. Those who think they know everything about him because of the amount of videos he posts on Snapchat with his baby girl, better remember he lets us see exactly what he chooses. One fine day, when People Magazine declares him ‘The Sexiest Man Alive’ (you know he’s on a short list somewhere) or if Vanity Fair sends a big name reporter to do an expose on him, he’ll likely elaborate on his past, but for now he would rather keep quiet about it. 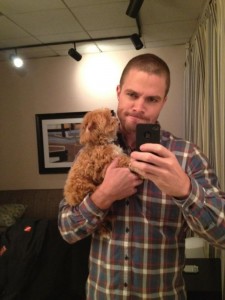