It’s been a LONG wait for HAVEN to return to our screens, and even longer since I was given the great privilege of watching parts of episode 514 being filmed in Nova Scotia back in August 2014.

I took the chance to grab some behind-the-scenes nuggets from cast and crew alike. So finally, let me share them with you in my episode recap! (WARNING: SEASON 5B SPOILERS!)

We pick up directly after the end of episode 513 as Duke’s ‘trouble bomb’ explodes, initially hitting Haven’s beach-goers.

Though the mood in Haven appears grave, the set’s atmosphere felt fairly relaxed with lots of smiling crew members keen to say ‘Hi’ despite the busy shooting schedule.

The Teagues convene with Nathan and Dwight in Haven PD to discuss ‘Croatoan’.

I was lucky enough to meet the Teagues on this set. John Dunsworth, in true Dave style, appeared to be having a quick rest on the chief’s couch, before greeting us then being told to move somewhere looking slightly confused with it all! Richard Donat was warm and welcoming and briefly reminisced about meeting fans in Birmingham.

Officer Rafferty voices her concerns to Nathan and Dwight.

This was the first scene we saw being filmed on this set. Watching on monitors whilst stood silently behind Shawn Piller you could feel the intense nature of the scene, which made it even funnier when Shawn called ‘cut’ on an initial take because Kirsty (Officer Rafferty) sounded too Australian!

Also watching the actors react to ‘nothing’ (as there was no sound coming through the walkie-talkie) was interesting.

In-between scenes was really fun since none of the actors are method actors (i.e. don’t stay in character) Lucas Bryant especially seemed quick to ‘goof off’ taking pictures with us in the short breaks, and Adam Copeland answered some questions. It was great to see they enjoy themselves at work. 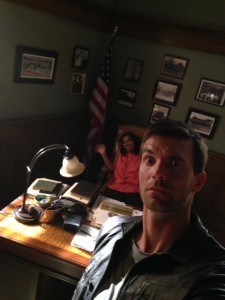 Fooling around in the Chief’s Office 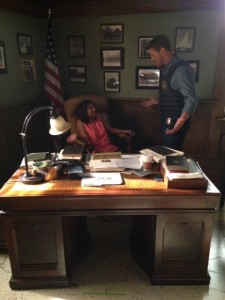 The Chief’s not impressed with me!

Audrey and Charlotte take Duke to the  hospital, before he quickly leaves.

The hospital sets were also built within the main stages at Chester Curling Club, and we took a look round them. A lot of attention is paid to small details by the set dressers e.g. real medical equipment and medical papers on barely visible desks with ‘Haven Hospital’ logos imprinted – it’s impressive.

This scene was filmed in Mill Cove. You may recognise it as the same location where Audrey and Nathan discover yet another impenetrable barrier surrounding the town – the ‘snowglobe’ in episode ‘Silent Night’. Coincidence or director’s in-joke? I think the latter.

It was fantastically exciting watching this scene being ‘blocked’ (i.e. acted out without cameras rolling to determine filming perspectives) It was great to have Shawn Piller, the director, explain the scenes being shot and some of the practicalities involved. We were standing just off to the left of Lucas with a whole gang of crew. Because the cameras were off there was some horseplay between Adam and Lucas as they apparently struggled to find their marks (where to stand) which got giggles from the large cast and maintained a levity on set, in contrast to this scene.

Personally I was particularly delighted to see Glenn Lefchak who plays Stan in action – and his perfectly comedic ‘What?’ makes me giggle every time! 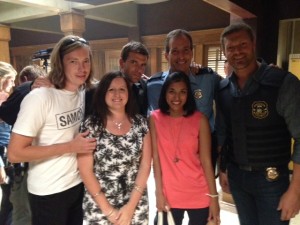 With the cast and friends on Haven PD set