The Teagues go to Gloria for help, who decides on Happy Hour in the morgue!

Jayne Eastwood, who plays Gloria, told me this was her favourite scene so far, as she had a lot of fun filming with Richard and John who she respects greatly. They haven’t had many scenes together, but these three seasoned actors certainly know how to bring the funny. Plus I wonder whether there was actual alcohol in that bottle? Jayne was also relieved to tell me that originally she was scripted to end up as a body in the morgue herself this season, till producers gave her a last minute reprieve – phew! Walking through the morgue set itself, next to the hospital set, it certainly looks realistic (believe me I know!) – if a little less grim.

Duke finds he is immune to the new Troubles, and starts to blame himself for current events as Officer Cena freezes everyone; meanwhile Audrey and Charlotte go on the hunt for Jo Cena.

I bumped into the actor playing Jo Cena, Anthony Ulc, whilst in Chester, Nova Scotia. He was having a great time filming though couldn’t reveal much about his character, except that he was Troubled and he died! That didn’t surprise me, but I wasn’t expecting his character to be so pivotal in setting the stakes for the second half of the season. It seems to be a change-up for this last season – to have a Trouble which persists even after the person’s death. 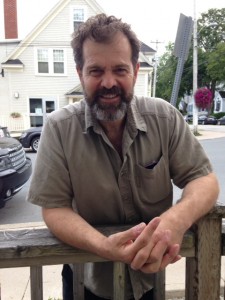 Charlotte and Dwight have a frosty reunion; Nathan and Audrey find the Teagues with a deceased Jo Cena and decipher Haven has a serial killer. Dwight deals with an earthquake-maker, receiving some help from a friend, McHugh.

WWE Christian, who plays McHugh, was on set with us as he also watched the earlier scenes in Haven PD being filmed, though he wasn’t working that day. Unaware of his wrestling fame he graciously introduced himself to me as Jay (after I accidentally hit him!) and simply acknowledged he had a small part on the show, coming to hang out with his friend Adam Copeland. I’m sure wrestling fans will get a kick out of seeing the pair together again. 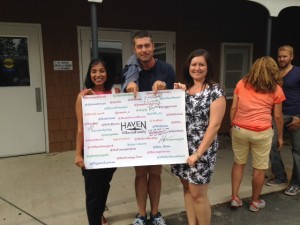 With Director Shawn Piller being photobombed by Jay/Christian!

After Dwight’s announcement, Duke leaves through the fog.

This scene at Mill Cove was the first we observed being shot – and the only one with Emily Rose. I was relieved to see her with blonde hair – my first indicator that she had turned back from Mara to Audrey by this point in Season 5. It was exciting to be able to listen to the main trio through headsets attached to their mics whilst watching them act both on monitors and from a distance, gaining different perspectives. But in place of fog there were about 50 crew members with masses of equipment pointed at them! The fog was filmed using CGI and a green screen. Shawn Piller was somewhat reticent to show us this scene for fear it would spoil the episode – a regular dilemma for fans – given Duke’s departure is a huge development, but I honestly don’t feel it did in retrospect. One huge bonus of visiting set for this particular scene was meeting more of the team – cast and crew – and being privy to Lucas’s off screen antics. It’s quite phenomenal how he can slip in and out of the Nathan persona instantaneously. I’m pretty sure he and Eric were discussing a shark show between takes! 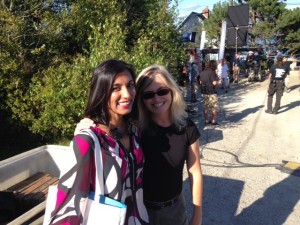 On set at Mill Cove

If you want to know more from my set visits to Haven, check out my previous posts or tweet me @tanavip and enjoy the final season!

Haven is currently airing on Syfy Channel on Thursdays at 10/9c in the U.S. and on Wednesdays at 9PM in the U.K.