TAKE A LOOK AT THE HAVEN TRIP PHOTO GALLERY FOR FULL SIZE IMAGES AND EXTRA PICS!

We drove out to somewhere near the Grey Gull, following signs for the Haven set. Arriving we saw cranes, trucks, crew members and lots of equipment. 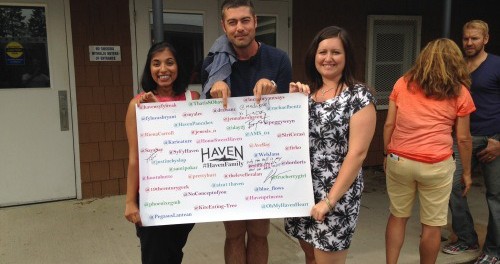 Around 125 cast and crew are involved in the day-to-day filming of Haven. The team were filming on a typically picturesque coastal road, with the sun beating down, as we were shown round by publicist Skana.

As we walked up a voice shouted ‘Hi guys’ and we turned to see Eric Balfour sitting in his director’s chair! After a brief exchange we were guided into a little tent – the director’s tent – to meet none other than Shawn Piller! He shockingly already knew who we were (Chester really is a small town!) and despite his busy job he took some time to chat and explain a few of the technical aspects of filming in-between takes. We also met Eric Cayla, the director of photography, and Joanne Hagen script supervisor. As we watched the monitors, they talked about how Haven is not shot on film but digital this season – as they simply can’t develop film anymore, and about the use of special effects, and different cameras to film the same scene. Joanne explained her role and how she uses various symbols to denote speech on her scripts. It was entertaining to hear her shouting out lines to the cast who were about 20 metres away whilst hidden in the directors booth!

We were handed headphones connected to the actors’ microphones to allow us to hear the scenes, and moved outside the tent to watch the actors live! No spoilers allowed I’m afraid, except to say we were there for shooting of episodes 513/514. It was an intense scene but needless to say we were already a little breathless with excitement! 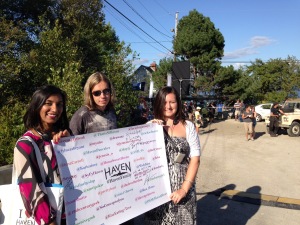 As they yelled ‘cut’ we heard another ‘Hi guys’ as Lucas Bryant approached us. We congratulated him on the scene – and on giving great hugs – and soon got chatting about the Bronco. Lucas told us how it always breaks down, earning its own chauffeur – a flat-bed truck! Sometimes they even have to push it into shot. He recounted a scene where he only had to drive it about 20 feet and heard a clunk as he pulled up; later it turned out a 2×4 piece of wood had fallen off the bottom of the truck – “What was it even doing there?” he asked. No idea, but hilarious! Lucas shared his snack of apple slices and almond butter with us – which was new to us Brits – and mentioned how he tries to eat healthily, before being called back to work.

In the next break Emily Rose came up to us followed by Eric Balfour! We gave Emily her collage and she was very sweet receiving it, asking us about the other Haven fans. I was pleasantly surprised that she remembered our meeting in London. She said she was enjoying filming S5 but it was a new experience as Mara, and with a small child to look after. She asked us where we had visited so far and recommended eating at the ‘Seaside Shanty’ – a favourite with the Haven crew. Eric asked me to take his pulse, and told us a story about his uncle who’s a surgeon. Then Eric started messing about – offering us sweets in a loosely disguised attempt to put chocolate sauce on Emily’s face – though she wasn’t buying it!

We met other crew members on set from the hair, sound and transportation departments. Everyone was so friendly and relaxed though Lucas had said it had been an intense day, which made us even more appreciative of our visit. Sadly we had to leave soon after, but not before grabbing a quick photo op. And as a cherry on the cake we received our own signed S4 posters! 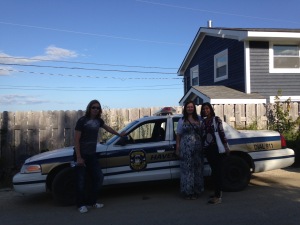 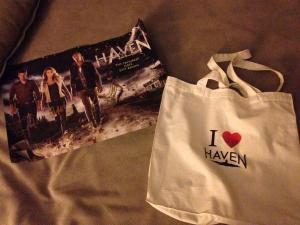 That evening, as the Seaside Shanty was closed, we headed to the Rope Loft then Fo’c’sle for dinner and drinks with Jayne Eastwood and met some of the sailors participating in Chester Race Week. We soon found out why Emily and Co. refer to Chester as ‘a drinking town with a sailing problem’! 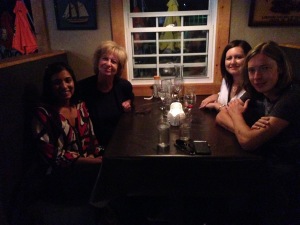 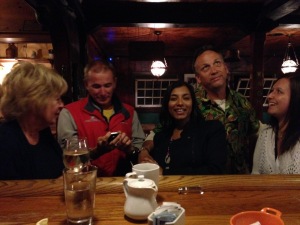 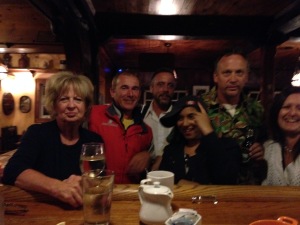 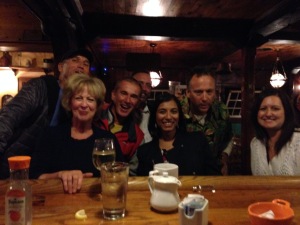 Images: Jayne and the sailors