Olicity! Bratva! OTA! New vigilantes! Fans have been quite vocal about what they most want to see in season 5, which premieres next week. But here are my more humorous (less likely) hopes for season 5 of Arrow

1) Lance in the Lair

We don’t see Quentin get in on much action these days apart from brandishing the odd gun, but Paul Blackthorne told me he really enjoyed leap-frogging Echo and protecting him from killer bees with a kettle, so how much fun would it be to see Lance training with the new recruits? Lance trying the salmon ladder would be a scene-stealer, and likely cause the grumpy ex-cop to spout some choice words! Oliver and Lance could have a ‘brood-off’; maybe discussing the difficulties of dating Smoak women. Lance and Oliver referencing pop culture surprised everyone last year and provided some light relief – wouldn’t you want to see their reactions to Curtis giving them a lesson in this? God help them, and us, if they suggest Lance wear a costume! 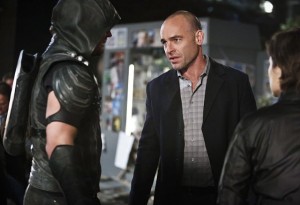 The writers surprised us all, including Emily Bett Rickards, when Felicity stayed in the loft and Oliver seemingly moved into the lair (or cave/ bunker – whatever you prefer).

But surely Mayor Queen can’t continue to live there?! Where does his chauffeur drop him off at night? Where do they send his mail? His mayoral entourage would start to get suspicious. Perhaps he and Thea will live together again – though it might be a little odd if they stay together in Laurel’s apartment! I would like to see some more Queen sibling banter that’s been largely missing since season 1, and Oliver’s take on home furnishing. 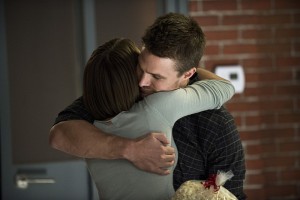 David Ramsey admitted Diggle’s daughter Sarah was a bit of a scene-stealer in season 4 – and fairly at home on the back of a motorbike! If David gets his wish we’ll see more of her next year, but with Diggle in the army and Lyla continuing as head of Argus, who’s left to babysit? Perhaps Oliver could take her out on routine runs. Felicity could send her to sleep by explaining coding. Lance could show his paternal side. Donna’s reaction to the Diglet in episode 305 was priceless, and even dragged a smile out of Oliver; I’d love the writers to consider a follow-up scene.

I think it would be a real missed opportunity if the writers don’t take the chance to reference The A-team this season in relation to Mr Terrific, and Echo Kellum agrees. He gave me his best Mr T ‘you crazy fools’ impression when I met him recently, and it’s definitely worth a watch. Add to that the whole cast’s enthusiasm for Broadway show Hamilton and surely they must have pitched a few ways to get that mentioned on the show. It may be the closest we get to a musical interlude, if we discount Felicity singing along to her Ipod in episode 212. Considering Supergirl has managed to acquire Superman for Season 2 despite the recent movie outing for the Man of Steel, perhaps this is the year Stephen Amell will finally get his wish for Oliver Queen to casually cross paths with Bruce Wayne, cameo style. I’d really like a Marc Guggenheim cameo, perhaps in the crossover, because fans love Guggie!

The promos have started referring to Oliver as this, and as Mayor I’m excited to see how Oliver fares in the limelight. Awkward press conferences, celebrity gossip posts and posh evening galas are all part of the job, so will they finally make Oliver dance? Will we get some more hilarious headlines referencing his physique that he will reluctantly need to respond to? Will he acquire some groupies that Team Arrow will have to deal with? Perhaps Felicity will be badgered into an exclusive ‘babble’ about being seen with Oliver despite their high-profile break-up? It’s a perfect opportunity to shed some specifics on pre-island Oliver’s dubious exploits, and I’m all for it. Many fans have pointed out it seemed unnatural that social media and traditional media alike hadn’t caught Green Arrow racing on top of buildings, or reported more on Oliver and Felicity. I think it could bring light amongst the Bratva darkness. 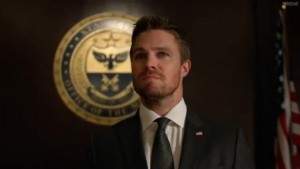 What would you like to see in Arrow Season 5? Let me know in the comments below, or tweet me @tanavip