Having landed back in the U.K. I’ve finally had a minute to reflect on the past few days: I’ve flown transatlantic, crossed 4 US states in 5 days, and even braved a storm which brought over 2 feet of snow to East Coast USA. What made me decide to embark on this crazy adventure? In short, Heroes and Villains FanFest (HVFF).

HVFF is essentially a comic con for DC shows and artists although Karen Gillan also attended. With the con cut to a single day due to the storm I focussed my attention on the Flash/Arrow-related events, though the cast of Gotham were also there. Fans were able to shop for nerdy goods, pay for signings and photos with the stars, watch panels with the opportunity for Q&A, and even run an inflatable assault course if they wanted (for the kids really, though I was tempted!)

For me, attending cons is always about meeting other fans, as well as the stars, and getting to ask questions about my favourite shows- with or without the camera being on. There is an emotional connection that binds fans together that I find myself wanting to experience more and more, and having the actors there immeasurably heightens the experience.

Of course all of this would not happen without the amazing casts and crews of these TV shows along with the fellow nerdy HVFF volunteers.

Here are just a few of my highlights from HVFF:

Saturday – HVFF snowday!
1: Fans coming together to brave the snow and make the most of the cancelled con day, maintaining great spirits and taking the opportunity to meet other fans. I got to make my first snow angel! Due to the weather conditions many of the featured guests had to cancel last minute, including fan favourites like David Ramsey and Caity Lotz. But those who did make it, despite the snow, put in extra effort to make it up to fans.

2: Lord Mesa being a total legend and inviting fans already there for the con to attend a special free signing at his hotel- dozens arrived yet he talked to and drew a pic for every single one!

Be sure to check out our interview with Lord Mesa (his real name BTW) on his cool career and thoughts on Arrow!

3: Actors Robbie Amell (RA), Stephen Amell (SA), John Barrowman (JB) and Katrina Law (KL) at lunch turning an Italian restaurant into an impromptu meet-and-greet for fans stuck in Meadowlands NJ. JB was so sweet that he actually started helping the waiters clean up!

4: JB keeping attendees informed and entertained throughout the day with his Facebook videos:

5: SA and JB turning Stephen’s Nocking Point party into a mini con – singing together (swoon) posing for pics on a mini red carpet, answering questions, and SA actually making JB blush with a kiss – that’s got to be a first!

6: SA helping a guy propose to his Arrow fan girlfriend, with JB proclaiming “you’ve got your own real life Diggle you lucky girl!” She said yes! 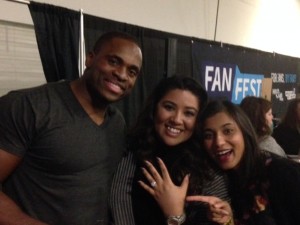 7: Nocking Point’s Andrew giving out wine & chocolates like a cool waiter, then gifting our pregnant Virginia with a special signed wine bottle to drink after her baby’s birth, so she didn’t have to miss out – awww! 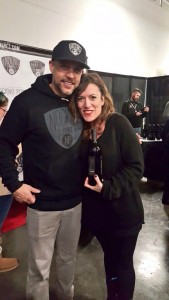 Robbie Amell and Katrina Law mingled with fans too – that woman radiates warmth and beauty! 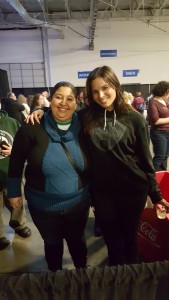 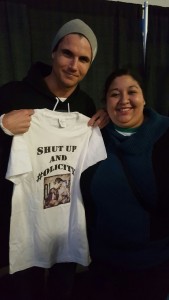 8: Meeting some of the lovely volunteers who helped to make the weekend fun under difficult circumstances was also special for me. 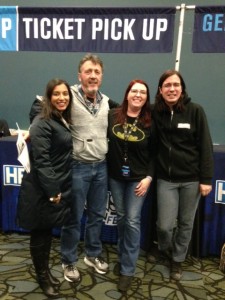 Sunday – Con day!
9: JB – meeting him, interviewing him, listening to him tell the story of training to be a bull fighter with his flamenco-dancer ex! Seeing him demonstrate the Spanish dance- crazy amazing!
Watch the video here, courtesy of Ari (@larojitalove) 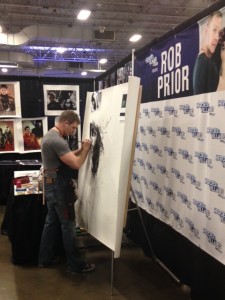 11: The Flash panel – with Teddy Sears and RA as Danielle didn’t make it.
Being front and centre as press, watching Teddy and Robbie interact for the first time was riveting. There were some great questions, and when I asked them who they would like to merge with ‘Firestorm-style’ in real life, I wasn’t expecting the answer to be given in body language, with Teddy and RA leaning in to look into each other’s eyes adoringly! (Kudos to moderator Dave Solo for doing a great job in his panels!) 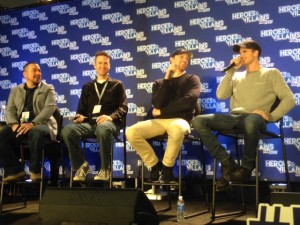 If you’ve ever seen a JB panel you know he’s the soul of the party. From his fabulous entrance onto stage, to saying he wanted to be Felicity then realising his unintentional innuendo, he was a spectacle!

“I’d like to play Felicity… Wait! Not because of THAT (Stephen)!” – @Team_Barrowman#HVFF #Arrow pic.twitter.com/RqtrcWyRcR

13: Meeting a very humble welcoming David Rapaport – who showed true appreciation of his fans. David talked about recently casting Tom Amandes on Arrow as The Calculator, and his thoughts on casting Emily Bett Rickards:

“He’s great as a person I love him, and I’ve seen some of the dailies and he’s great (as The Calculator)”.

“I work in California and Arrow is shot in Vancouver. We watch all the Vancouver casting videos that come in. She [Emily] was on a tape with like 20 people and we all signed off on her and she had 1 line. She was great, for a one line role. And then they keep writing for her and she was amazing so, yeah. We got very lucky. It was Peter Roth at WB who said ‘I want to see more of this girl’. Your guys’ support helps with people like that.”

“Casting a show is like matchmaking for 20 different people. You don’t know if it’s going to work. There are some actors that are great in the room that just don’t translate on screen. With Arrow it worked.” 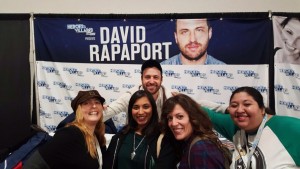 14: Interviewing the handsome Robbie Amell about his plethora of current projects – check out the video here!

15: Sunday night X Files viewing party! Watching the return of the cult show we all remembered from our childhood after learning just how huge fans my Spanish friends were actually got emotional! And the show didn’t disappoint! 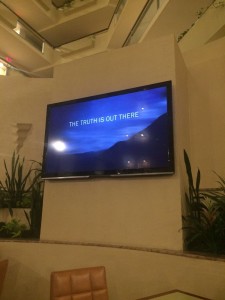 16: Meeting my fellow fans, making new nerdy mates was the biggest highlight. Staying with my Spanish-speaking friends and learning what shows such as Arrow and the X Files mean to them, listening to their unique experiences with  fans and stars alike, in person and on social media, was intriguing.

Merche (@dattrav) accomplished her mission to get Marta’s (@EmilyBett_ES) gift to Emily, and Stephen, all the way from Spain. From the actors’ tweets I reckon this was probably their favourite gift of the season – and months in the making! What makes it more heartwarming is to me this is evidence the actors do listen to their fans and care. I would like to know what they do with ALL those gifts though! 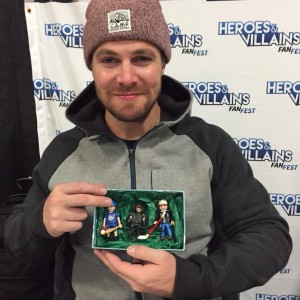 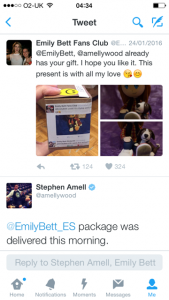 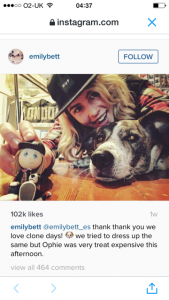 We will have more posts from HVFF up shortly, but for more info from the Con check my Twitter under #HVFF.

Please let us  know your thoughts – on Twitter @tanavip or below!

In the meantime here’s a few photos from the event:

Special thanks to my press pals Virginia (@Beijingdoll) and Ari (@larojitalove)!

HVFF’s next event is in Chicago, March 12th-13th – visit their website for more details.

The Flash and Arrow currently air on CW channel in the US on Tuesday and Wednesday nights respectively. New episodes will return to Sky1 in the U.K. in March.