It’s not often I write down my opinions for the world to view (I prefer to listen), but I thought I’d make an exception for the epicness that was DC TV’s Superhero crossover event Invasion! Sky1 aired the episodes over consecutive nights this week, and I’ve managed to avoid almost all the breakdowns, tweets and gossip about it to give you my own unadulterated review and highlights. Let’s see if you agree with me or not…highlights first:

Supergirl:
Let’s be honest – Supergirl was barely ‘crossed over’ with only an ending scene featuring Barry and Cisco to legitimise its involvement in the event. However it gives me opportunity to mention Mon-el; it’s like a pre-requisite to being on that show that you must fancy the lead, yet in my opinion no-one has generated chemistry with Kara except Mon-el.  I hope he sticks around. But why no mention of Jeremiah Danvers especially with Thanksgiving and Eliza Danvers around??

The Flash:
Barriver – or whatever the current ship name is for the Oliver/Barry bromance: it’s sweet, and at times hilarious, how Oliver encourages Barry to be a leader, though I’m not sure a baptism of alien fire is the best approach; and sticks up for him when he takes yet more grief for Flashpoint. Though both characters have changed a lot, they maintain the compelling relationship they started 3 years ago.

Thea back as Speedy! Frankly, it’s about damn time.

Newbies not involved: I think it was a good call not to involve the new recruits in The Flash. It would have slowed the pace of the episode. Though maybe they just decided there were too many people on screen already.

Diggle’s deadpan humour: Fans have been waiting a while to see Diggle’s reaction to Supergirl. The subtle ‘I’m convinced’ was funny, but the running joke of Diggle not being able to handle Barry’s speed is the real comedic gold. I’m biased though – I love David Ramsey’s character and really enjoy seeing him have fun amid all the angst. The poor bloke needs a break.

Of course the moment we see them suited up together for the first time.

White Canary’s one liners: “Are we just supposed to pretend like we don’t hear him (Oliver)?” and “Let’s go drink” are just a couple. Sarah may not say much, but when she does it’s worth listening. 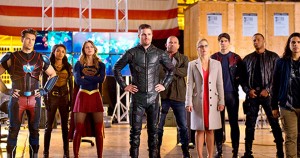 Arrow this week was (I never thought I’d say this) like watching a TV version of Independence Day, mixed with The Matrix. The CGI was believable quality. Turns out Arrow does space well.

James Bamford’s directorial skills and first class fight scenes: on point as always; he does seem to like fighting on front lawns.

OTA alternative lair scene: John Diggle being scary Hood gave me shivers but I like it!

The Flash casually acknowledging he is upstaged by Supergirl.

The heart-wrenching Queen family reunion and Oliver’s dilemma: a moment of emotional acting from Stephen Amell left me a little teary-eyed.

The spaceship hangar: to use a Cisco quote ‘so fricking cool!’ And it was green, I hope Oliver appreciated that.

Legends of Tomorrow:
Cisco and Felicity geeking out at the ‘funky fresh’ Waverider: emulating how most Arrowverse fans feel watching the crossover. Good on Cisco for making it into every crossover episode.

Ray: “See ya later Dominator” just made me laugh.

Felicity realising she bears an uncanny resemblance to Supergirl – and apparently Ray’s cousin. Given they dated? Weird.

I adore the ending scene: sweetly seeing Kara off, Dig sharing his wisdom, Sarah and Oliver acknowledging it all started with them, ‘super speed arrow duel’ (though gutted it was off screen – fingers crossed for DVD extras) and the final toast ” to things not being normal, to life being full” Already a favourite line ! 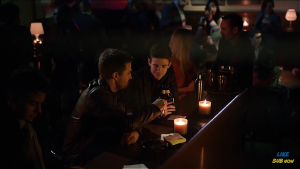 Things they should have left out:

Whining Wally- I feel like the storyline of Wally wanting to use his powers and the Wests alienating him (see what I did there) has been stagnant for multiple episodes and stalls the momentum of the special episode.

They could have totally done without Iris in this event. She tends to put a downer on things. That said, it’s a  great moment where she says “so Oliver Queen is the Green Arrow? Oh my God he just got so much hotter” to Barry’s chagrin. Another throwback to first Flarrow crossover, and what Candice Patton and I were hoping for last year.

Though the Alien look may be an accurate representation of the comic panels, I simply didn’t like them. Too out of place in the shiny DC TV universe.

The rest of the Arrow alternate reality felt ‘icky’. I’m not sure how to describe it but I felt unsettled watching it. I suppose that was the aim, but once Oliver figured out it wasn’t real it also didn’t make sense to me that he’d want to elope.

Wishes for next crossover: Could they travel to National City? And more harkbacks to previous crossovers please. Plus we really need to see the super speed arrow duel on screen!
Best crossover episode: The Flash, and Arrow in space
Crossover MVP: Barry Allen

Let me know what you thought of Invasion! in the comments below, or tweet me @tanavip!