On a cold cloudy night in Bristol it feels like the stars have also sought refuge from the weather inside the beautifully lit planetarium as 100 excited fans eagerly await the arrival of the man behind the megahit sci-fi novel The Martian, Andy Weir. In town to promote his new book, Artemis, we are treated to a special Weir-orientated presentation of planetary images followed by a Q&A with the amazing author. 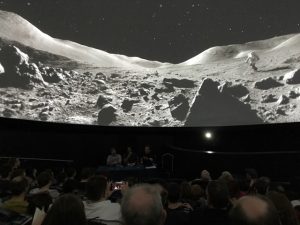 From the outset Weir – a former software developer and self-professed ‘space and economics dork’ – captivates his audience with fascinating insights into story development and understandable explanations into the research behind his bestsellers.

We also discover that, jetlag not withstanding, Weir is a very witty charming guy. The event is excellently hosted by fellow science and sci-fi nerds Andrew Glester and Timon Singh, from podcast The Cosmic Shed, who mix banter with burning questions for a highly entertaining evening.

Weir begins by explaining The Martian developed after toying with the idea of what it would take to mount a mission to Mars- just for curiosity’s sake! “I thought, okay, what happens if this goes wrong? What happens if that goes wrong? You need to make sure your mission plan doesn’t kill the crew. And so I realised the increasingly desperate things you’d have to do to survive might make for a good story, and I created an unfortunate protagonist and subjected him to all of it!” 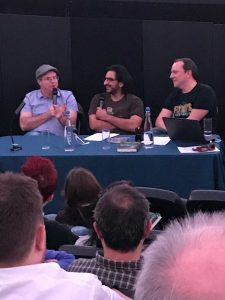 Artemis is set in a moon colony of that name, with a very different protagonist to Mark Watney. “I wanted to write about space colonisation, not just exploration, and it was clear to me that the Moon is the first place we will colonise. I wanted [Artemis ] to be about humanity’s first city that’s  not on Earth. This is what I came up with.”

The main conceit is that middle classes can now afford to travel to the moon, allowing space tourism. Weir designed the entire lunar city before deciding on the story. “I based the economy on Caribbean resort towns where you have nice glitzy hotels, casinos and stuff like that, and the more austere conditions for the people who live and work there. There’s a train to the Apollo 11 visitors centre. You look over the landing site and exit through the gift shop!”

The story follows Jazz Bashara, an Artemesian Muslim woman in her 20s. A loveable rogue struggling to get by, she ultimately becomes embroiled in a heist. Surprisingly Weir has more in common with his new protagonist.  “Mark Watney is an idealised me. He has all the qualities I like about myself and none of the flaws. He is what I wish I could become. Jazz is more like what I was like at 26. She has flaws, internal conflicts, questionable morals. She really is a reflection of me even if she’s not the same colour or gender.” During the talk, Weir drinks whisky and jokes with his hosts about fake spoilers – including a car chase and prolonged lesbian love scene – but such levity doesn’t detract from his considerable intellect, which is evident when Glester asks him to explain how you can light a cigar in 100% oxygen He does so effortlessly (it relates to partial pressures) while simultaneously explaining what went wrong with Apollo 1. Weir even wrote a 10 page paper for Business Insider about the economics of Artemis! 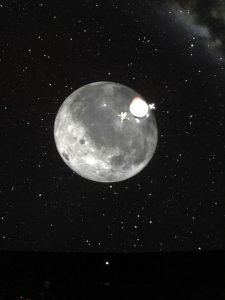 Travelling to the Moon

Understandable then that he  wrote The Martian as a niche novel for space enthusiasts.  Weir still has no idea how The Martian garnered such mainstream appeal: “I just never imagined that millions of people would want to read what is basically a series of algebra work problems”

But they did, and his success led to Hollywood fame and hanging out with celebrities like Jessica Chastain and Buzz Aldrin which he describes as ‘surreal’.

It wasn’t all plain sailing though. “Ridley Scott wanted to have mission control in Cape Canaveral and I fought him tooth and nail on that, because it’s ‘Houston’. That’s what the astronauts say when they’re talking. Houston is famously not in Florida!”

Weir excels at sci-fi grounded in reality and plausible science. But he certainly felt the pressure of following up on his success. “I found that the southwest corner of my office is the best one to cower, whimper and cry in! I knew that I could write 20 more books in my career, all that people enjoy and get 4 or 5 stars, and still not equal the success of The Martian. I just had to make my peace with that. For Artemis I just want people to read the book and go, ‘That was cool, I enjoyed that.’ That’s all I’m shooting for.”

In fact Weir shelved his first attempt, Zhek, after completing 70,000 words, which was very difficult at the time but, he feels, the right choice. ” In its current form I don’t plan to continue or finish it.”

A second hit however with Artemis seems inevitable. 21st Century Fox have bought the film rights, with Phil Lord and Chris Miller (The Lego Movie, 21 Jump Street) already attached to direct – to Weir’s amusement. “Disney owns Star Wars, and they were having conflict with Disney execs over the Han Solo movie so they left or got fired- I don’t know I never really asked them the details – so then they went to work with Fox on Artemis. And now Disney bought Fox. So they’re working for Disney again! I give them a lot of crap about that.” 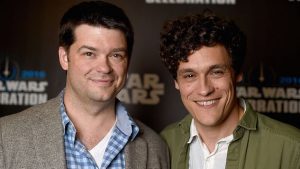 Singh points out that the directing duo is known for encouraging ad-libbing, so does Weir have any qualms about Lord and Miller ‘freewheeling’ on his story? “No not at all. My job is to write a book and I do my thing. Their job is to make a movie which is commercially successful. Hopefully their path to commercial success is to make s movie that’s good! I mean Batman vs Superman was a commercial success and it was crap! There is a difference between telling a story via a video medium and via a book. Whatever changes they need to make to make the movie good I would want them to do it. I don’t have this religious adherence to the mighty text that I shat out over the course of months!”

Weir does not think about film potential when writing. “My job is to write a book. If I want to write a movie, I’ll write a screenplay. If you try to divide your loyalties between writing a book and writing a movie in the form of a book then you’re just going to end up with something that’s not good at being either one.” 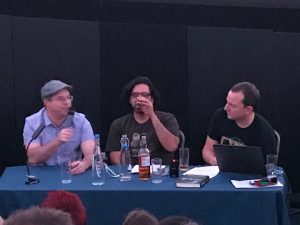 The event includes some hilarious fan interactions and a guessing game entitled ‘Mars or not Mars’ which Weir is funnily terrible at. But one of the best moments of the night is seeing NASA images of Trappist-1E displayed on the 3D planetarium dome (presented by Antonia Forster). An Earth-like planet so far away we can currently only imagine what beings inhabit its surface, but it makes one wonder is it only a matter of time before science fiction becomes science fact?

Living on the moon could certainly become a reality in our lifetime, but for now I recommend you let Artemis help you imagine it, for as Antonia says : “In my opinion two of the most powerful things in existence are books & astronomy, because they have the power to transport us through time & space”. 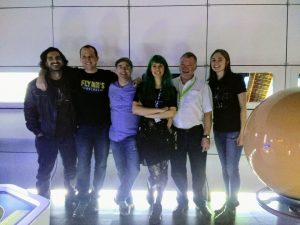 Artemis is the first book in a planned novel series by Andy Weir. It’s currently available on Amazon and in most bookstores.